← more from
See Blue Audio
Get fresh music recommendations delivered to your inbox every Friday.
We've updated our Terms of Use. You can review the changes here.

Video for 'Testimony in Progress' (clip) by Thomas Ragsdale 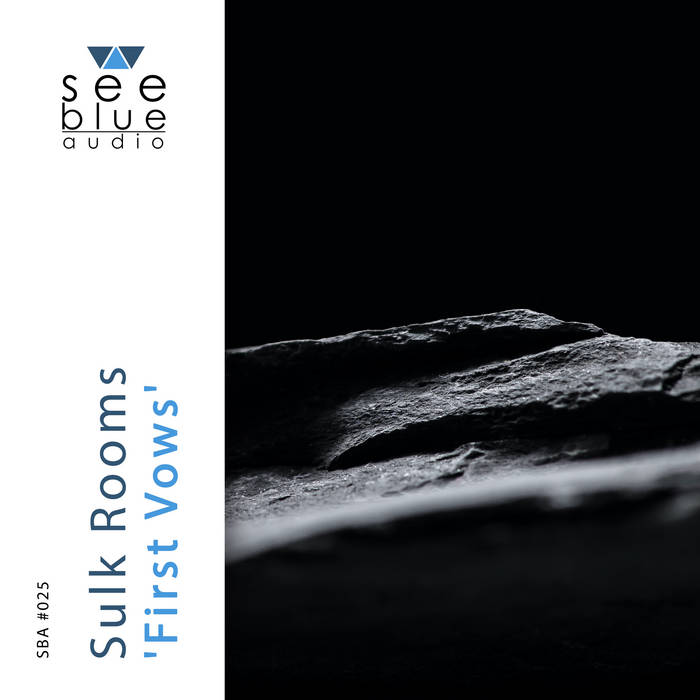 As summer fades into autumn, See Blue Audio welcomes the first in a series of new artists to its roster in the shape of Sulk Rooms. With the coming of the new season and following the sonic landscapes of Simon McCorry’s ‘Flow’, Sulk Rooms represents an expedition into the darker side of ambient music. This takes shape on ‘First Vows’, the twenty-fifth release on See Blue Audio, and two longform tracks of drone aesthetics and dense atmospherics.

Sulk Rooms is the new drone-style project from acclaimed electronic artist Thomas Ragsdale. As well as being a prolific producer of shimmering, impassioned techno, he has a string of soaring and evocative electronica releases under the Ffion name, and contributed to labels like Burning Witches, Third Kind and his co-founded imprint Soundtracking The Void. Ambient textures and beatless soundscapes have long featured in Thomas' music, which draws influences from his home and studio base in the rugged West Yorkshire countryside, and they can also be found in his soundtrack work for film and television.

A hint of this new direction with Sulk Rooms can be found in the earlier ‘Honley Civic Archives’ releases on Soundtracking The Void, and Thomas has used his formidable production skills to channel his frustration with the more established, ethereal style of ambient music into creating something that is challenging for both artist and listener, but also intensely rewarding. Spontaneity is another key element in the Sulk Rooms equation, and once Thomas had found his musical voice, the tracks flowed naturally using as a very basic studio setup and often recorded in a single take. Subtle changes in mood also reflect the recordings taking place in a limited series of locations in his home and garden. A flurry of releases are already scheduled on independent labels in the ambient and experimental sphere. The five-track ‘Overheard Conversations’ EP on Anticipating Nowhere Records commences, followed shortly by ‘First Vows’ on See Blue Audio, and then releases to come on Waxing Crescent Records, Werra Foxma Records and others. More will surely follow as Sulk Rooms develops into a divergent route for Thomas’ creativity.

‘First Vows’ opens with ‘Testimony in Progress’, a 12-minute musical embodiment of dark energy. Beatless it may be, but there’s a ferocious intensity within its walls of ghostly textural noise, and sublevels of crackle and static. Sufferers of agoraphobia and claustrophobia should take note. As Thomas explains, “I wanted it all to sound like a giant physical weight on the listener’s head with no real emotion attached to it – just crushing noise – but also not brutal or angry or even loud.”

‘Testimony in Progress’ is all this and then some, while ‘The Witness Is the Unknown Caller’ delves even deeper into hypnotic drone over the course of its 15 minutes. Both pieces are deceptively simple, but when fully immersed within, it becomes evident to the listener that they are focused on density in sound rather than intricacy, and herein lies their sonic power. More is most definitely more with Sulk Rooms.

This may well be music for the head rather than the body or the heart, but there’s also a spiritual quality at work here, even if it is a kind of disassociated spirituality. This is life seen from the outside looking in, as the track titles might suggest, and as much spectator as it is spectral. With ‘First Vows’ and the Sulk Rooms project in general, Thomas Ragsdale has tapped into the new normality and post-reality of the present day creating a musical tapestry that truly mirrors the zeitgeist of the moment.

All tracks written, produced and mixed by Thomas Ragsdale.

I make music as Sulk Rooms. Synths for the band Pijn.
thomasragsdalemusic@gmail.com

Bandcamp Daily  your guide to the world of Bandcamp